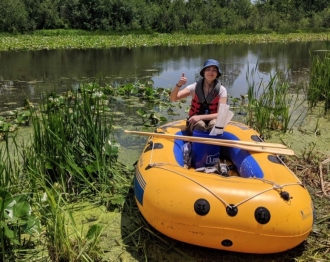 I completed my undergraduate studies in Geology at McGill University. During my time there, I had the opportunity to study coastal wetland environments in a paleo-ecological context. I also gained experience using a variety of techniques in Quaternary Science. Over the summer months I worked as a park attendant at Petrie Island, one of Ottawa’s most significant wetlands. As a park attendant I spent lots of time in swamp and marsh environments on the island and gained practical knowledge about the species and systems at work in Ontario’s wetlands. All of this has led me to begin my master’s degree under Dr. Finkelstein. For my master’s I am looking forward to comparing hardwood and softwood peat from a forested wetland in southern Ontario. 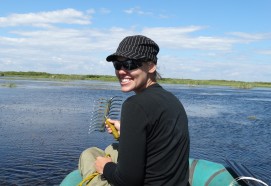 fy potential sources and transportation pathways of contaminants (e.g. microplastics, trace metals, organic contaminants) to northern aquatic ecosystems, with particular interest in determining how recent climate change and human disturbance might impact the source and transportation of contaminants through northern aquatic systems. Further, my research aims to identify and assess ecological response and sensitivity to perturbations, both natural and anthropogenic, in northern aquatic and multi-stressor environments. My research involves paleolimnological and contemporary investigations, utilizing biological and chemical remains within lake sediments. To date my research has focused on environmental change in freshwater systems in the circumpolar Arctic and subarctic.

I recently completed my Ph.D in Physical Geography at University College London in the UK, where I undertook a combined contemporary and multi-proxy paleoecological approach to determine ecological responses within shallow lakes of the Selenga River basin, Siberia, to natural and anthropogenic disturbances.

My current research is co-supervised by Dr. Finkelstein and Dr. Miriam Diamond, and I am investigating spatial and temporal dynamics of microplastic pollution in freshwater systems in Ontario, including the critical systems of the Hudson Bay Lowlands.

I was born and raised in Nova Scotia, and completed my BScH in Environmental Science and MSc in Biology at Acadia University. During my undergraduate research, I studied the bioaccumulation of lead and arsenic in wetlands managed for wildlife habitat in the coastal Bay of Fundy region, where I worked out of the Beaubassin Research Station in Aulac, New Brunswick. I was keen to continue research on coastal ecosystems, and subsequently returned to Acadia University and Beaubassin to pursue a MSc in Biology, and studied restorative ecology and productivity declines in constructed wetlands. From these experiences, I developed a great interest for understanding and applying good science-based evidence in environmental management. Thus, I am excited to continue broadening my knowledge on wetlands by pursuing my PhD studies here at University of Toronto. My PhD research will focus on understanding carbon sequestration in undisturbed and restored coastal wetlands, and how wetland carbon budgets have been, and could be, affected by climate change. 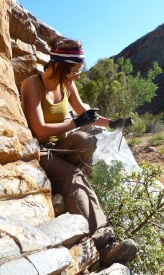 I received my B.Sc.H in Archaeological Science and Biological Anthropology from University of Toronto. For the last two years of my undergrad, my fascination with human evolution lead me to South Africa where I have been involved in isotopic studies and archaeological excavations. Simultaneously, at the university I have been working in Dr Finkelstein’s lab acquiring expertise in various paleoecological techniques (i.e. analyses of pollen, diatoms and plant macrofossils). Upon graduation I decided to combine my archaeological background with the research experience gained at the laboratory. My PhD research will investigate the impact of changing climate during the late Pleistocene through Holocene on regional vegetation in the context South African Early and Middle Stone Age. To this end a variety of paleoenvironmental analyses will be conducted and correlated with archaeological records. Of particular interest are the effects of such conspicuous events as the Last Glacial Maximum and Younger Dryas. 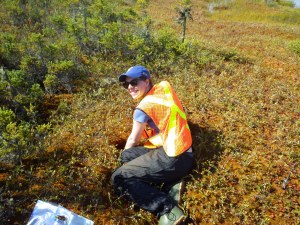 I completed my B.Sc. (Honours) at the University of Victoria in Biology and Earth and Ocean Sciences Combined and my M.Sc. in Earth Sciences at Carleton University. During my undergraduate degree I became interested in the earth sciences because of its multidisciplinary nature. This led me to an honours project that investigated how climatic and successional changes influenced local and regional Holocene bog vegetation records and carbon accumulation on northern Vancouver Island. My master’s project investigated the relationships between benthic paleo-redox conditions and global transgressive-regressive cycles in the Late Cretaceous Polar Sea and how these factors influenced foraminiferal community assemblages. For my PhD research I am interested in investigating linkages between carbon flux variation in peatland ecosystems and biotic and climatic changes through the  Holocene, focusing on the Hudson Bay Lowlands region of northern Ontario.

I finished my B.Sc. and M.Sc. at School of Earth and Environmental Sciences, Seoul National University, Korea. For my Master’s thesis, I studied permafrost and analyzed Alaskan soil cores to see the vertical distribution of CH4. During my undergraduate years, I took a class which gave me insights into paleoclimatology and global carbon cycles. It was fascinating to understand how the atmospheric CO2 and CH4 levels varied in the past by interactions between carbon reservoirs of the Earth system. As I learned more, I found that high uncertainties still remain for evaluating the Earth’s carbon pools including global peatlands. Regarding this, now I am working on a project to figure out any relationships between the extent of temperate wetlands and the variations of atmospheric greenhouse gases (GHG), especially for the last 2000 years.